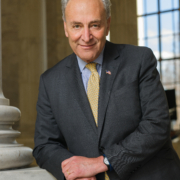 “At a time when we need to be supporting our hospitals with robust funding to help them keep their doors open and doctors available, threatening them with substantial cuts to essential funding is fundamentally wrong,” Schumer said, speaking of cuts in Medicaid disproportionate share payments (Medicaid DSH) mandated by the Affordable Care Act, delayed many times by Congress, but now scheduled to take effect when the current continuing resolution funding the federal government expires on December 11.

The Medicaid DSH program was created to help hospitals that care for especially large numbers of low-income and uninsured patients – like America’s private safety-net hospitals.  The National Alliance of Safety-Net Hospitals has long called for delaying Medicaid DSH cuts and most recently urged Congress to eliminate the Medicaid DSH cut entirely, writing in a letter to members of Congress that

Private safety-net hospitals and others like them, serving communities with large numbers of low-income and uninsured residents, have never needed the resources afforded by Medicaid DSH more than they do today.  Congress has long questioned the wisdom of this cut and has never permitted it to take effect. The most recent delay expires December 11, and NASH urges you to repeal permanently the Medicaid DSH cut in any spending or COVID-19 legislation you pass this year.